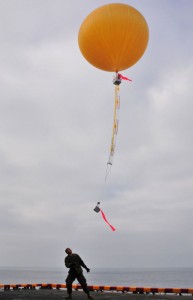 Something a little different than the usual satcom stuff. For the second time in as many weeks, FM voice traffic from US military stations was monitored on 251.600 across a wide region in California and Arizona. Since this activity was monitored across such a large area, it suggested that the comms were originating from something at high altitude (either satellite or balloon). I personally thought the signal was much too strong to be coming from a satellite, and due to the fact it was not heard by remotes east of the Rockies, it had me leaning towards the balloon theory as well. Well, as luck would have it, today the users confirmed over the air that they were indeed using something called SkySat.

A quick Google Search tells us that SkySat is “a bent pipe [radio] repeater the size of a coffeemaker” launched into near-space between 65,000 and 95,000 feet. It’s attached to what can be compared to a weather balloon, and its line of sight gives it a coverage “footprint” of about 600 miles that extends even into urban and mountainous environments with clear transmissions.

Here is a sample of some of the radio traffic monitored today between stations Title Holder, Conductor and Black Watch.

Listen to the audio clip

Comments feed for this article

Welcome! Here you will find frequencies, reception logs and recordings for HF utility stations and UHF satcom. All of the logs and audio clips posted here are monitored from my location in Riverside County, California.